Recently when reading on of the blogs I followed I ended up reading a blog post from way in the past, something like 2006. It was a mundane post about what was going on in their life.  I realized that this person could go back years in their blog and have little remembrances of what their life was like in the past. I’ve decided I’d like to use my blog in that way as well, so that in six years I can look back and remember what I was doing. So am going to write these “That was the week” posts in which I will recap what happened the previous week. I am sure my almost 30 regular readers will find these boring but hey this is my blog.

Note: I didn’t proof read this post. It’s too long and it’s already Wednesday of the next week.

Monday: After work I did my usual Monday outing. This consists of going to the local bowling Alley with some friends and watching whatever sports catch my fancy.  They have the new  Illinois gambling machines there and I usually throw five to ten buck in. I almost always lose but it’s not like I am spending huge money.  My buddy on the other hand seems to be single handily trying to keep the Illinois government afloat.  I have seen him win big $900 or $700 a night. Most nights he loses to the tune of 2 to 3 hundred dollars.

The big news of the night was game 3 of the Stanley cup finals.  Sadly the Lightening won and took a 2-1 game lead in the series.  My prediction of a Hawks win in 5 games shattered.

Tuesday: This took place over the entire week but I am putting it on Tuesday because that is when it started. I am on a minimalist kick again.  I have been going through old and unused things. If I find something that looks like it has some value I try and sell it on ebay. I had put up some old dvds I hadn’t watched in years. Somebody used the buy it now option on Monday so I packed up the dvds for shipment. Ebay provides a convenient option where you can just buy the USPS shipping label from them print it out and drop off the item. Somehow I screwed up and purchased two identical shipping labels. I only printed out one. I dumped the package in the bin and thought no more about it.

I really looked at my PayPal page and  noticed the two identical charges.  I also saw that the tracking information said the package had never been received by the Post Office.  Each of the shipping labels I purchased had a different tracking number.  One said it had never been use the other said it had been delivered that day. Knowing that PayPal would try to hold onto my money until they could confirm delivery, I looked for a way to update the tracking number to the one I actually used. I finally found a way to do that but I had to use the old PayPal interface. I then looked for a way to try and get a refund for the unused shipping label.  It turns out that if a shipping label isn’t scanned after five days ebay gets refunded the money which they then refund to your PayPal account.  Allegedly,  I am still waiting for my refund.

Wednesday: It was a pretty big day around the wonky house.  First Wednesday is my standing trivia night. I meet a bunch of people at the local Buffalo Wild Wings and we play trivia against each other.  We used to have live trivia but the guy who ran that moved away. We just play the Buzztime games.

More importantly it was game 4 of the Stanley Cup Finals. With trivia over I went home between the second and third periods with the game tied 1-1. I watched the rest of the game on my computer while doing some other stuff. The Hawks took an earlier 2-1 lead.  They managed to hold on and win but the last minute was some of the most nerve racking hockey I have ever watched.  My heart raced the entire time. The Lightening had several excellent chances but they could not put the biscuit in the basket. Look here for a story and short video about the game.

Thursday – Friday:  Both days were nice and boring.  I would come home from work and was quite happy to just hang out at home.

Saturday: The big day of the week. I had a lot to do.  I needed to be up at Medinah Country Club for a wedding reception by six o’clock. It’s about a three hour drive so I wasn’t in much of a hurry. I had plenty of time. My plan was to get up, maybe go for a walk, maybe clean a bit, have lunch and then set off. The forecast was calling for some storms so I thought I might have to work around them.

Having time I went for a walk.  When I got home a started cleaning a little and I turned on the dishwasher. I got sucked into reading old blogs. I started going through my blog reader and looking at now defunct blogs, reading old posts from years ago, and then following links and to other blogs. I realized I needed to take a shower, but I couldn’t because I had just run the dishwasher which uses up all the hot water. I would have to wait about an hour.  That was still fine. Plenty of time left. I decided to make up some homemade pancakes to eat.  I had all the ingredients I thought.  Oops no butter, and my measuring cups and spoons were in the dishwasher still.  I had to eat something so I hoped in my car and drove to a local fat (yes that is intentional) food establishment. I got back home and I still had five hours to get to the reception.  I took my shower, threw my stuff in the car and took off.  I got to my parents which was 2/3 of the way. I put on my suit.  Trust me. I looked goooood.

I arrived at the beautiful and historic Medinah Country club to act as the plus one.  I am often the plus one. It’s a great way to get good and free food 🙂 I had a good time at the reception and it seemed like most people did.

The reception happened to coincide with game 5 of the Stanley cup playoffs. I had installed an app on my phone so I could keep up with the action. That wasn’t necessary because he DJ said he would break in with updates on the game. And that he did.  When the Hawks won I saw something I hadn’t really considered would happen at a wedding. The bad quality video below shows people dancing to Chelsea Dagger celebrating the Hawks victory. At this point the series was 3-2 with the Hawks no needing only one win to get their third Stanley Cup in five years.
This video doesn’t work 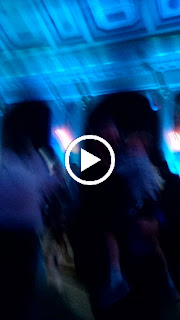 Sunday: I woke up at my parents house and hung out with my Parents. I did my usual run to McDonalds for breakfast that I do when I am home.  My mom went out shopping while I stayed to take care of my dad. While out she learned that a friend, Henry, had had his van t-boned.  She picked him up and we had an early dinner.  On the drive home I had to go through a really nasty downpour. I was not shocked to learn of flash flood warning in that part of the state.