Imagine, it is kinda late on  a Friday night and three middle age white guys sit around a table in a local sports bar. Over the speakers starts to play the now familiar sound of Daft Punks’ Get Lucky.  I’ll admit not the most appropriate lyrics but a catchy tune.

“Hey I karaoked this the other night”, one of the men says and begins to sing the intro. He gets to the chorus.   “No you are butchering it”, one of the other men interrupts. “It goes like this.”

Corrected, the two of them belt out the chorus.  At this point, the third man begins vigorously chair dancing.  After about a minute of this, the group notices that the three twenty something women who were sitting at the bar.  Got up quickly and left the building.  I think the term fled might be most accurate.

A Series of Disasters

Recently life has been beset but what are a mostly comical series of disasters.

The man gets his money

The day I went to go see the Peter Frampton concert, I opened the mailbox to a very large envelope in the mail. Along the return address were the words so many American fear, Internal Revenue Service. With more anger than fear I ripped open the envelope.  Hadn’t they taken enough? They clearly didn’t think so.  I had a bill for more money.  I didn’t have time that day to check to see if their calculations were correct.  I did go through my records later and realize they were probably right.  After a short consultation with a nice woman from the IRS I realized I would have to pay.. Grrr

Never look a gift horse in the worn out gasket

You all remember the free clothes washer I got a month or so back. After my fifth or sixth load I walked into the small utility room the put the clothes in the dryer and promptly slid across the floor. The floor was covered in about a glasses worth of water.  I turned off the water to the washer and mopped up the floor.  I checked and it looked liked one of the ancient hoses was leaking a little. About  a week or so later I finally bought some new hoses and installed them.  I put a load of laundry in  and I waited in the utility room as the washer did it’s job.  I am alarmed to here a splashing sound as water starts leaking out of the bottom of the washer.  I turn the water off at the hoses and start trying to figure out what is wrong with the thing.  It eventually stops leaking and I manage to get the washer through the cycle. Checking online it sounds like I might have a bad agitator gasket.  I am not going to pay someone to fix a twenty year old washer I got for free.  So I’ve begun the process of taking apart the washer myself if I can see what is wrong with it.

I have been wanting to get some shots with my camera trying out a new idea of mine.  For this I wanted to have the camera on my tripod.  I went outside and pulled the lever to release one of the legs. Oh it released alright.  It fell right out of the socket and clattered to the ground.  I couldn’t believe it. I tried to fit the leg back into the socket when another leg fell off.  Finally the middle piece dislodged and bits of broken plastic cascaded to the cement.  Seeing as I was standing about ten feet from a dumpster I picked up the mess and tossed it in.

You get what you pay for lesson 3

I needed to put a new item on my wall so I had to drill a few pilot holes for the drywall anchors.  I dragged out my old cordless drill.  Being me I had purchased the cheapest one on offer a few years ago.  I plugged the battery into the charger and was greeted by the familiar red light indicating charging. I went off to do some stuff while it charged. Upon my return I was met with the smell of burning electronics and the charging light was dead.  The wall charger almost burned my hand when I yanked it out of the wall to stop a fire from starting.  Needless to say the battery was not charged and the drill is useless.  I never liked that drill anyway.

TMI WARNING you probably don’t want to read this!.. who knew cats could get constipated. 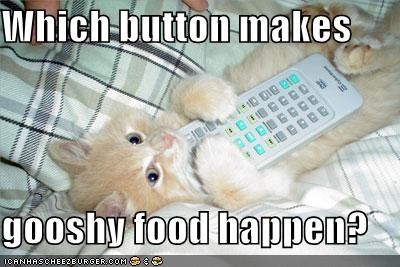 I had noticed that my fuzzy little ball of annoyance seemed to be more unhappy than usual. Also I watched him several times try to use the litter box without success.   I planned to take him to the vet the next day.  I didn’t need to. I was met the next morning with a nice pile of cat poop.. .in the middle of the living room.  My worries that he would stop using his box were unfounded as he spent the next couple of weeks happily regular.  But that didn’t last.  He was exhibiting the same signs as before.  I called the vet and got some advice on what I could do.  I came home from work and again could stop worrying.  This time the giant poop pile was in the bed.  I warned you not to read this 🙂

If you want to know what advice I got it was to start feeding him some canned gooshy food and had a tablespoon or two of pumpkin to it.  He loves his new dinners and eats up all the pumpkin.  Important warning: make sure to buy plain canned pumpkin NOT the stuff for pumpkin pie.  Cats cannot digest sugar and it quickly will cause feline diabetes. Note I am not a veterinarian and you should not do anything I’ve said.

I wonder how many posts on blogger have  “constipated cat” as a label?  No I am not going to check.

Yeah yeah I know it is sunday.

I first had this soup from a local cafeteria.   I loved it so much I had to try and make it at home.  Made at home with fresh ingredients, I can tell you it is even better.

Chop the tomatoes and onion into largish same sized chunks.  Deseed and also chop up the red pepper.  Put into a bowl and lightly coat with olive oil.  Place the veggies on a cooking sheet and place it in an oven at 350 for about fifteen minutes.  You want the peppers to actually get a little brown.

There are two ways to puree this mixture. You want to do it while the veggies are still hot so the cheese melts.  The first option is to put the veggies in a pot and use a stick blender.  Or if you have a nice thick glass blender like I have you can just dump it in there.  While it’s blending slowly at the cheese.  This will make a mess since the cheese sticks to things.  A delicious gooey cheesy mess.  I admit it is kinda of a pain to clean everything afterwards. Just blend it to your preferred consistency. I like mine to still have chunks of onion and pepper in it.

Like usual I have no pictures of the finished product.  Why?  Well, it is so good that I just stood in the kitchen and started eating it out of the pot.

Moving forward when life is on hold

Are you all getting sick of these introspective posts?  I know I am, but I just don’t have much else to write about right now.  I guess I could finally write about my trip to London and Paris.  Someday I promise to write those and show off my crooked pictures.


I commented to an online friend, hello Chris Foley, that my life is currently on hold. The circumstances causing this are largely out of my control. The conversation got me thinking.  What do I mean life was on hold?  How on hold is it?  And even during this time what can I do to move forward as a person? Thus follows some nonsensical musings.

What do I mean life is on hold?

Do to health, personal, and financial situations a lot of options in life are currently not possible. It would be unwise to move to a new city or get a new job. Not that I want a new job I like mine. My dream of expating to another country just isn’t possible right now. (note: expating is not a word according to the dictionary, but seriously expatriating sounds so pretentious) Basically, in large life decision needs to be deferred until these situations resolve.

How on hold is it?

Not nearly as much as I make out. I like to use this as an excuse to be lazy. Anybody who knows me IRL knows that I am generally pretty lazy and always like to take the easy way out. There are still legitimate limitations. I had to stop jogging because it aggravated my health issue. I can’t take a long vacation.

What can I do to move forward as a person?